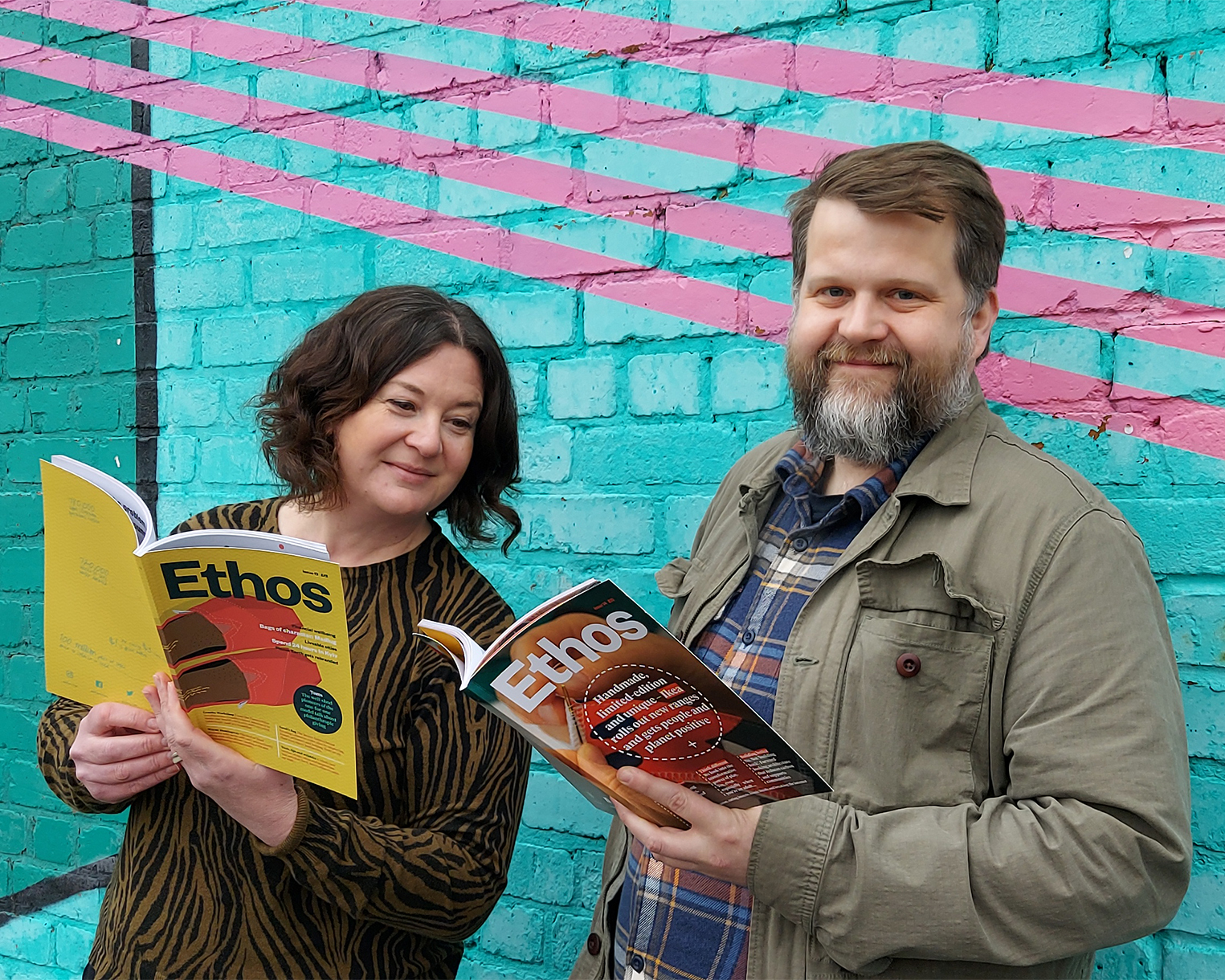 The making of… Ethos Magazine

Welcome to The making of… blog series. Can you start by introducing yourself.

We’re glad you can be part of our series. Can you give us a bit of a background of where you’ve come from and how you arrived at where you are today?

I started off as a business journalist in the late '90s, when business wasn't, generally, good or responsible or sustainable. I found that world difficult to navigate – I was a fish out of water. But it taught me a lot. From there I moved into publishing non-fiction – we still publish non-fiction books, magazines and newspapers as part of our agency work.

But the majority of our work now is working with grassroots businesses and organisations in the social economy/circular economy/good business world, and helping them articulate what they do, through a variety of different formats – stories online, offline, in film and in print.

Championing businesses doing good, helping them articulate what they do and telling their stories is definitely a huge plus in our book. So knowing what you wanted to do, how did you come up with the idea for Ethos?

We'd published a newspaper for a business festival being held in Liverpool, our home city, highlighting some local success stories and sectors – some big ones like football and music, some more surprising, like tropical medicine, or our wealth of social businesses. A contact of ours – who we went on to work with for a number of years – suggested we published one for social enterprises. We didn't want to publish something that would only exist for one sector – our ethos is always to make these stories accessible and interesting and widely relevant – but we liked the idea of focusing on businesses doing some good, and the idea was born - a magazine about business changing the world, sustainable ideas, good people, their ethical aim and innovative ideas.

Knowing how difficult it can be to get a magazine off the ground... What research did you do to arrive at what you've got now and how did you test your product-market fit?

We published online initially, for a couple of years before we developed the print magazine. During that time we had hundreds of conversations with businesses around the world, readers, local organisations and a growing audience, to get their feedback. When we finally felt ready to publish in print, we crowdfunded the first issue, which is always a good proof of concept. We've refined it over the last five years – we mark five years in print this spring – incorporating ideas to evolve it from our team and our readers, including questionnaires and surveys and feedback on social media. We're a work in progress!

We believe most modern businesses are constantly a work in progress. It makes absolute sense and if the last couple of years has taught us anything it’s about constantly adapting to change. So what was the first issue of the magazine like?

Half the size (in terms of number of pages), and twice as frequent! Ethos 01 was ever-so-slightly smaller, much skinnier, and came out quarterly. We've moved from a boxier, image-led front cover to a full-bleed format, which allows the cover to sprawl across the whole of the page, and wrap on to the back too. Sometimes we use photography, sometimes illustration. The inside features were also more consistent in length – they were broadly similar, whereas now we have lots more short, accessible bits, more illustrations, practical tips and infographics. 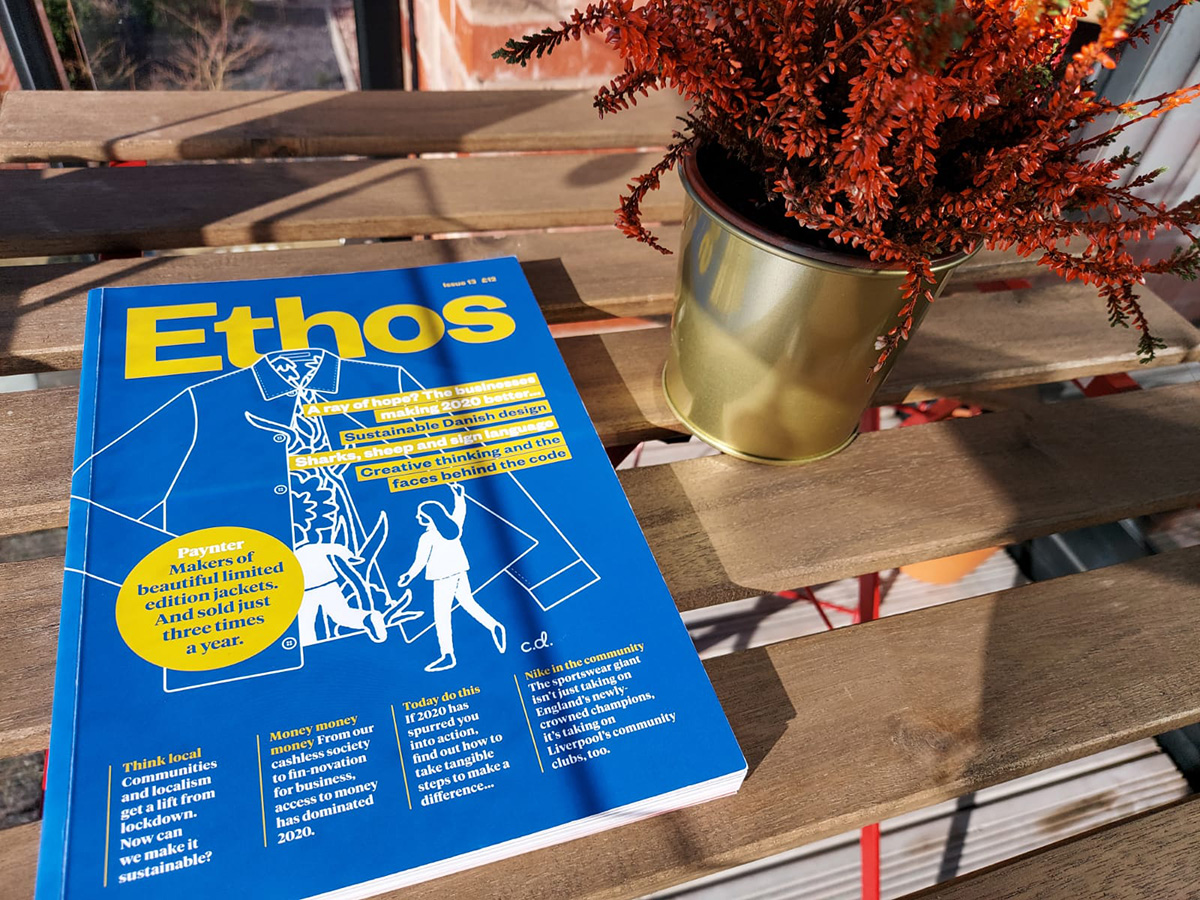 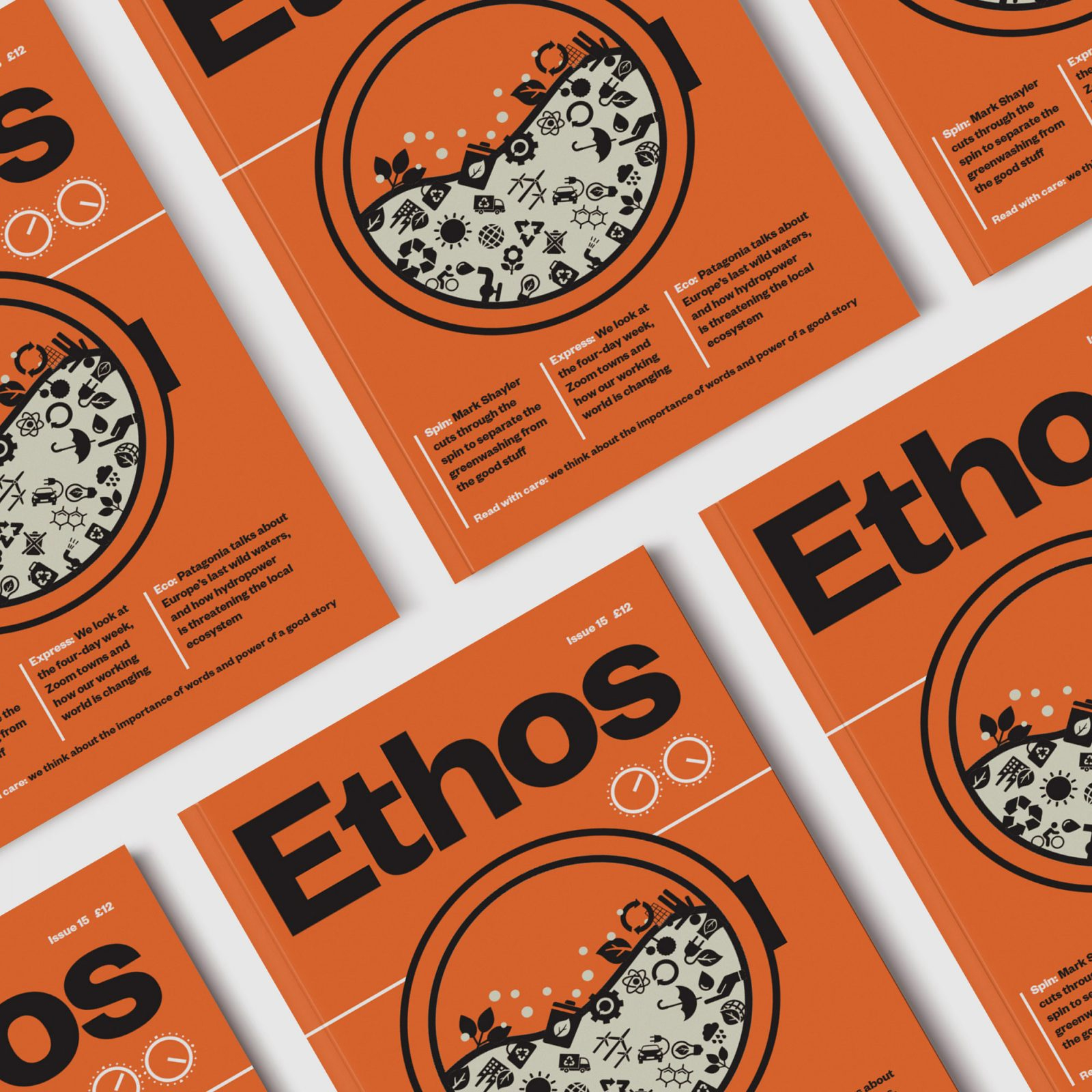 We have the current issue in the office, and it’s looking pretty amazing. Now that you’ve told us about the launch issue and the changes you’ve made, we can see exactly what you mean. How about funding? How did you initially fund everything?

When we started online, we worked with three local partners to build the website, which was a tweak on an existing website we had and the writing was funded via our agency, Wordscape – most of the team wrote Ethos features alongside our client work. We crowdfunded when we were getting going, to build an audience and get early copies out there to show people what we were all about.

We’re getting the sense you really know what you want and like which is awesome. So what about branding? Can you tell us about the process and how you arrived at where you are today?

We'd done some brand development work around our original idea and mission, so we knew we wanted to call it Ethos. The design team we worked with at Smiling Wolf created a word marque for us and some early icons, which we used across the website. We were trying to do everything on a shoestring at the time. The site followed the format of an existing one, so we had to work within those constraints. That evolved when we started designing the print magazine, and then has evolved again over the last few years, adding complementary fonts; apart from our Ethos coral colour, we don't have a colour palette – each magazine has its own.

You previously mentioned the crowdfunding campaign and we know you’ve got an established network of supporters. However, beyond that how are you getting the word out there? How are you scaling the brand?

The crowdfunding campaign put us in good stead; we've got readers in about 25 different countries as a result. Now, we use social media, but also a range of partnerships and collaborations. We work with several co-working spaces and have content partnerships with organisations like Atlas of the Future, TMRRW and Another Startup Story. We try to be as collaborative as possible, so we do things with a variety of different organisations that have things in common with our audience, from events to websites, newsletters and podcasts.

Being collaborative is another modern 21st century business trait we absolutely love and strongly believe in. Beyond all that, what would you say are the biggest challenges you think you'll face moving forward?

Growing our audience is the big thing for us, to make the magazine stack up financially, whilst making it as accessible as possible for people. But within that audience growth, we're working hard to reduce our waste.

Last year we really started to focus on subscriptions, as it helps us to have a much clearer idea of how many magazines we need to print for each run,  reducing waste and energy.

It's an ongoing challenge. We're working specifically on our carbon footprint and bringing more circular practices into the process. The magazine industry is full of waste – shops that have unsold copies typically rip the covers off, to save having to send magazines back, but prove that they won't sell them. It's really wasteful, so we're trying to offer alternatives to that and get much sharper on printing just what we need.

Brexit was also a big challenge for us, as it made sending magazines to the EU, where we have a significant portion of our readers, harder – more expensive, and less reliable. 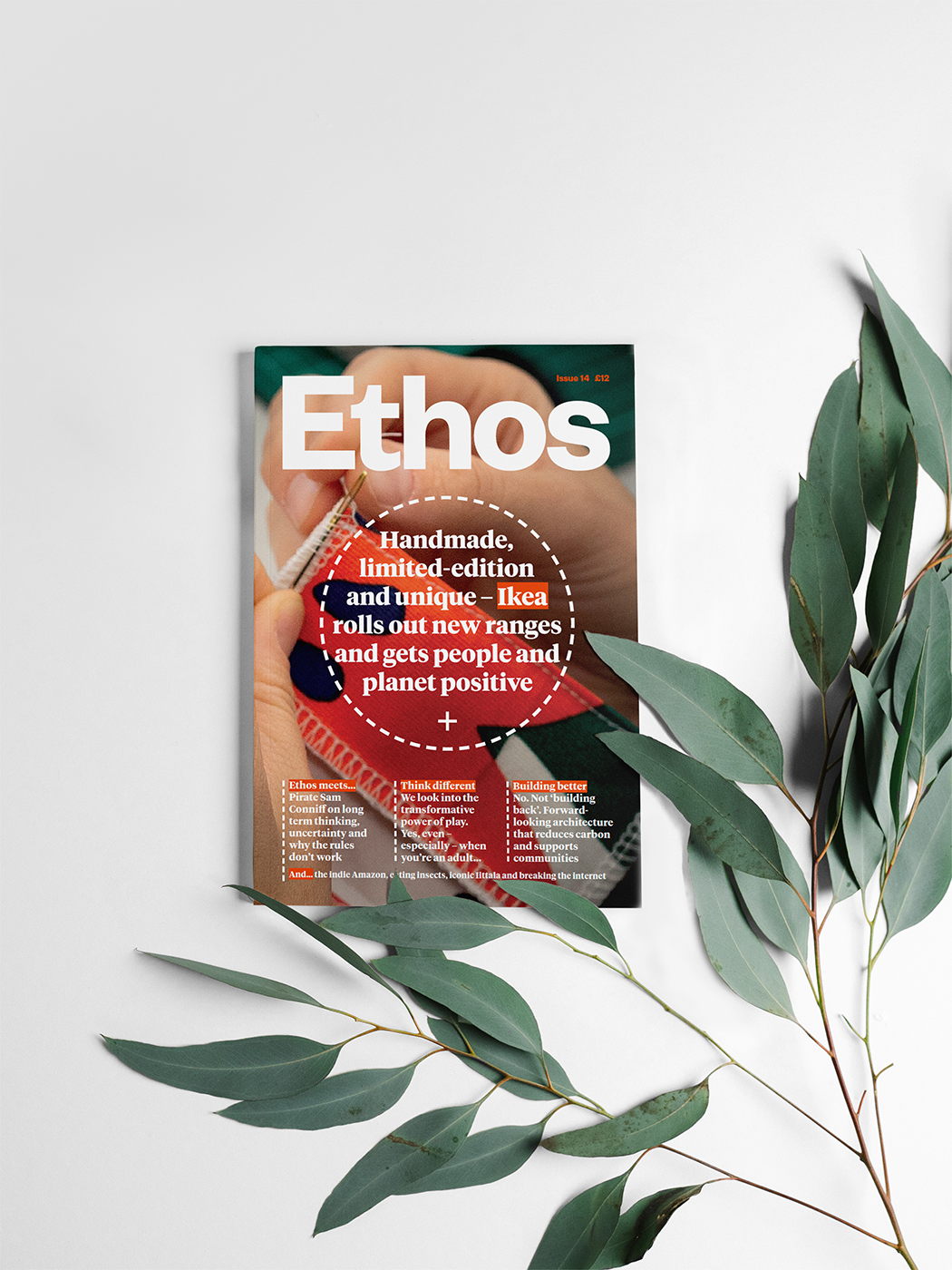 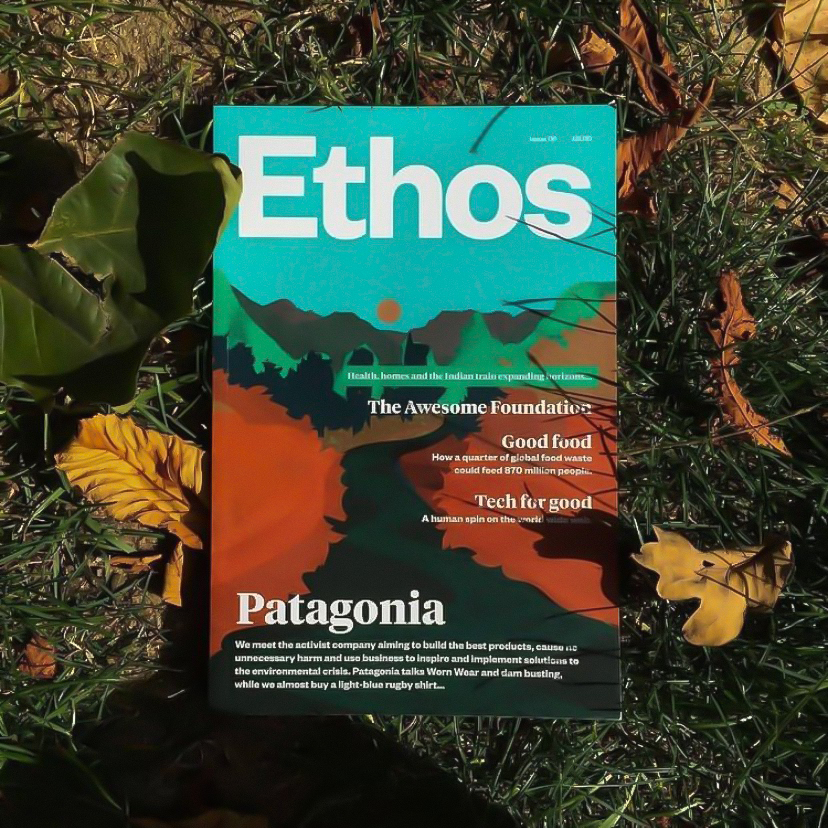 We appreciate your time and we thank you once again for being a part of The making of… blog series. As a last question, what advice would you give someone who wishes to start their own magazine?

Making the finances of a magazine stack up is a really tough business, so be clear why you’re doing it, and what success looks like to you. We haven’t made Ethos profitable yet. But we’re pretty close to covering its costs, and know that it adds hugely to both our team’s experience and opportunities, and the insights and ideas we can bring to our clients.

I’d also advise anyone to think of non-traditional ways of selling their magazine, as – although magazine shops are always full of people who love magazines – there’s so much competition there, it’s hard to stand out. Traditional retail, and its margins, are tough. So think about the places your audience assembles, and build a community of your own. For some that might be online, or it might be pretty local. Both can work, but you need to work out what works best for you.